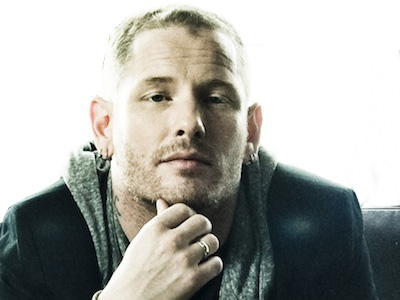 Corey Taylor’s four part mini-series The House of Gold and Bones was written to serve as the compendium for the two albums of the same name, released by Stone Sour. It served as the perfect visual guide for fans. On the other hand, it would have been a kick ass comic book all on it’s own.  While sitting down to discuss it with him, it became evident immediately that this was not just a marketing angle. This was the culmination of years of comic book fandom. I truly hope that it will be one of those great instances where a mini-series gets it’s own title in the comic book world.

Geek and Stuff: How did having a comic book series, in conjunction with the album come about?

Corey Taylor: When I was writing the short story for the album, I was really trying to write it in a visual way, so people co 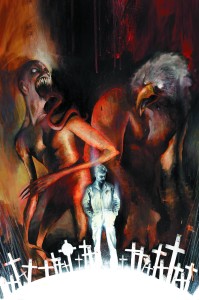 uld read the story while they were listening to the music. I wanted it to be really evocative and loaded with descriptive imagery. While I was writing it, I had this really quick thought “This would make a really cool comic book.”  The idea just got bigger and bigger to the point that I was looking at it saying “These characters would look like this, and this scenery would look like that.” The more I thought about it, the more I started to take it seriously. One thing led to another and I mentioned it to the right person, and that person mentioned it to a couple more people, and the next thing I knew I was shopping this project to different comic book companies. It got to the point that Dark Horse was really the only company that understood what I was trying to do. They saw it as a mini-series as well, and they have a history of working with musicians and trying to bring things like that to fruition. It just made a lot of sense. They got it the quickest of all of the people I talked to. In retrospect, I’m really glad that I went with them. They understood they I had never written a comic book, and they helped me through the whole thing. They helped me with figuring out artists and it was really awesome to be able to do that, especially as a comic book fan. One more check off the bucket list.

G&S: Not many comic collectors in the world will ever get to say that they have written a comic book for a major comic label.

CT: RIGHT!! Not to mention the fact that the fans really dug it, and I got to do cool geeky stuff like having variant covers and all that shit. The collected trade should be coming out towards the end of September. So not only did I get to write a comic book, but I’ve got a trade coming out. I’ve got my own graphic novel for Christ’s sake. I’m really stoked about this. It just really kind of hit on all cylinders for me. 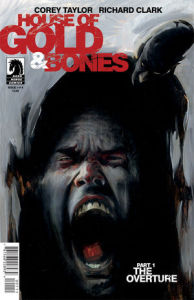 G&S: You know what’s even better than that? The movie based on the graphic novel.

CT: YEAH!!! You know, I’ve been thinking about it. Honestly, in the same breath that I was saying this would be a great comic, I was also saying this would be a cool movie too. I think it’s just a matter of time before I actually take that next step and do something like that. It’s still a ways out. I’ve got a couple other projects that are still on the burners.

G&S: While we are on the topic of comics, I feel as a comic book guy, I would be remiss if I didn’t ask who your favorite comic character is.

CT: Well that really depends on what genre we are going with. If we are just specifically going with super heroes, Spider-man has been my dude since I was five years old. The very first comic I ever read was a Spider-man comic book. As I got older and really started to understand the depth of the character, I saw so much of myself in him, that he has been my guy forever. He’s just the man.

If we are talking about other comics that are not super hero related, I’ve got a couple of them like Jesse Custer from the Preacher series. He’s probably one of my favorite written characters ever. Because of the morality, and because of the fact that he went through Hell and back, and he was still able to know who he was and have that strong sense of self.

From an absolutely crazy standpoint, I’d have to go with Spider Jerusalem from Transmetropolitan. It is, to this day, one of my favorite comics to read. It’s one of those comics that I don’t think I’ve ever laughed that much, just from the shit that comes out of his mouth. I’ve always said that if I was ever going to play a comic book character in a movie, Spider Jerusalem would be the dude to be. He’s bald. He’s nuts. He’s covered in tats. He just doesn’t give a shit. If he needs to blow something up, he’s just going to fucking blow it up, and he’s intelligent enough to know why he was doing it in the first place. If they ever were going to make a Transmet movie, the first thing I would do is shave my head and walk in to the audition. I’ve even got a bunch of collector’s edition stuff, from when the comic was still out. I’ve got his glasses, his watch, I’ve got it all. I could just walk in looking exactly like him and say “Just give me fucking the part before I kill you all.”

G&S: You never know, they could make the movie. They’ve got to get around to it at some point.

CT: You know, it really is a great time to be a comic fan, between the comics and the movies, and more and more stuff is becoming available to us. The only thing that really bums me out about the whole thing is that geek is becoming the new chic. I was at comic con in San Diego, and I saw more douchebags walking around that place. You know, the dude bros. They don’t give a shit about comics or action figures or anything like that. They’re there to be seen, because that’s where all the focus is. Driving around San Diego was essentially like Las Vegas with no casinos. I was like “YOU’VE GOT TO BE FUCKING KIDDING ME!” I just wanted to start running people over in the streets. It really kind of bummed me out, because I had waited a really long time to go to Comic Con. For the most part it was awesome. People were walking around in cosplay, and really into it. Then you’ve got these dickheads who have no idea how fucking truly cool it is to be in that place. You’re surrounded by action figures, comics, T-shirts, and the whole nine yards, and it’s essentially douchebag central. I was there with my family and I was so fucking mad. I was like “This is stupid. Why are these fucking people even here?” This isn’t fucking Cabo. You want to get wasted? Go somewhere else. Leave this for us. Can we just have one fucking thing? You think you know what it was like to get beat up in school? You think you know what it was like to get shoved into a fucking locker? WE DO!! GO FUCK YOURSELF!

So, that was my rant about dickheads. So yeah. (laughs)

G&S: Don’t let that ruin your cons. Try some of the smaller cons like Denver, Phoenix, or even DragonCon in Atlanta. There’s less of a fan to douche ratio.

CT: I’ve heard really good things about DragonCon. I’d like to make it out there.

G&S: They have a parade for God’s sake. They shut down downtown Atlanta, and have a geek parade.

CT: (Laughing his ass off) That’s awesome.  I actually just got asked to go to Stan Lee’s Comikaze. I’m hoping I can do it. If my schedule will allow, I’m really going to do my best to make it. I’m really stoked for it, and I think that could be a really good time.

CT: Exactly. He’s really the king daddy of everything. At least one of them. And he’s still flying the flag, which to me, is so cool. If I ever got to meet him, I think I would shit twice and die.

G&S: My last question was submitted by a reader named Jeff Parrish, and I have to ask it, just because I almost pissed myself laughing when I read it.

G&S: Who would win in a dance battle, you or Chester Bennington?

CT: (Laughing his ass off) Wait a minute. Let me make sure I got this right. Who would win in a dance battle, myself or Chester Bennington? (laughs again). That’s a great question. I’m probably going to have to say Chester. I’m quite on record as saying that I dance like I’m being shot at. (laughs) I’m definitely not the most versatile or coordinated guy on the planet. I can run around the stage all day, but when I dance I look like I’m pretending to. I can’t it’s really just all I’ve got. I look like I’m making fun of it. No. No. Those are really my moves. It’s sad, but oh well. I’d have to give that one to Chester. BUT, who would win in a headbanging contest? You’re talking to him.