Last month Horror Block released their Hannibal block, which wasn’t a disappointment if you were a Hannibal fan. I, having not seen the show, was a little disappointed but I am fully aware that I can’t be happy every month.

That being said, I was disappointed with this month’s block. In general, the box was just lackluster for any type of horror fan with nothing truly spectacular to excite anyone.

I suppose the best part of the box is the t-shirt. Having just finished reading The Shining and starting Dr. Sleep, the Overlook Hotel shirt was great timing. The shirt has the famous Overlook carpet pattern on it with Jack’s infamous axe, the year the film was released and one of the famous lines from the film delivered by the old caretaker Mr. Grady to Jack Torrance, “You’ve always been here.”  Being that The Shining is arguably one of the best horror films out there, I am more than happy to own this shirt. 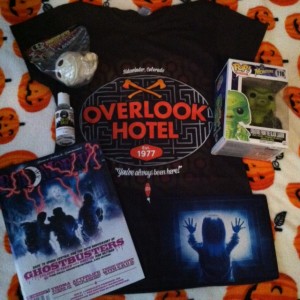 were promised something Universal Monsters related. Once they announced that Funko Pop was coming back to Horror Block, it became very obvious that we were getting Funko monsters. My box had The Creature from the Black Lagoon. The options were Creature, Dracula, Wolfman, Frankenstein’s Monster and The Mummy. While I think the Pop is cute, I don’t collect Universal Monster items so I was ambivalent about it. I am sure any Universal Monsters fan was excited to receive theirs.

Here is where things go downhill. We were promised a zombie item. With all of The Walking Dead items out there or even all of the various zombie related toys, shirts, household items, etc… there was the opportunity to give us something really awesome. Instead, we opened our Horror Blocks to find Zomb-Ease. While it sounds like some sort of sex lube, it is a small bottle of hand sanitizer. It is literally just a bottle of hand sanitizer with a zombie name put on it. It was a massive disappointment to everyone expecting a cool zombie item.

Then we got a
Poltergeist mouse pad. Yes, Poltergeist is an amazing movie and one that I watch multiple times a year but a mouse pad? Who really uses mouse pads anymore? It isn’t even the size of a full mouse pad, but half the normal size which is just strange. The box is starting to feel like we are just getting items no one can seem to sell.

The toy was a squishy skeleton whose eyes pop out filled with maggots when you squeeze its head. It is a cheap dollar store toy that I would normally buy for my nephew to gross him out, not something I would expect in my block.

Lastly, Fangoria disappeared from the block this month and Rue Morgue came back. While I was happy that the cover of the magazine was Ghostbusters, Rue Morgue just isn’t as good or interesting of a magazine as Fangoria. I think this was the biggest disappointment in the entire box for me.

While the main box wasn’t anything to write home about, the Beast Block this month was. The subject was American Horror Story including the first four seasons on DVD, a mug and a hooded sweatshirt. Then there was a PS4, a year of PlayStation Plus, preorder of Dying Light, an extra controller and PlayStation TV. Whoever won that had themselves a great month!

Hopefully next month’s block will be better. With all of the great horror films coming out this year, they have the potential of giving us some cool promo items and toys. I don’t see how it could possibly be worse than this month.