Even though Mad Monster Party is relatively new to the Phoenix convention scene, they are no strangers to putting together great events across the country. They have shown time and time again that they are a company that is all about every facet and genre of horror, and this year’s Mad Monster Party Phoenix was no exception. They carefully pick guests and events to cater to any and all fans of horror, spanning every generation. Whether you are a fan of slashers, monsters, gore, supernatural, or old school horror, I assure you there was a good time to be had at the Mad Monster Party. 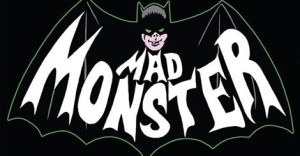 Let’s start with the guest list. For you fans of the old Universal Monsters, they brought out the stars of Creature from the Black Lagoon, Julie Adams (Kay Lawrence) and Ricou Browning (the Creature in all water scenes). For those of you into 80’s horror, like me, they rolled out a whole slew of great guests including Doug Bradley (Hellraiser), Vernon Wells (Mad Max), David Naughton (An American Werewolf in Londo

n), along with a Fright Night 30th Anniversary, cast reunion. If modern horror is more your speed, they brought out Derek Mears (Jason Voorhees from the 2009 Friday the 13th), and Sid Haig (Captain Spaulding in House of 1000 Corpses & Devil’s Rejects). Just for good measure they threw in Fonzie himself, Henry Winkler, James Hong, John Kassir, and many, many more. One a side note, I have to say that despite not “really” being Fonzie, that Henry Winkler was by far one of the coolest people I have ever met in my life. He is so down to earth, funny, and friendly that I recommend to anyone who gets the chance, take it and meet him. He was doing magic tricks for children, telling jokes, and or course, doing the obligatory “Aaayyyy” with his thumbs out, for all of his fans. For a complete guest list, you can visit www.Madmonster.com 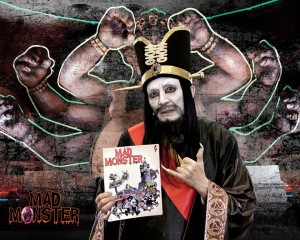 In addition to the very impressive guest list, Mad Monster put together a series of events, that no horror fan could resist. They even arranged for some of the guests to perform photo ops, with fans, in full costume from their movie. My personal favorite was James Hong in full David Lo Pan costume from Big Trouble in Little China. There were also, of course, panels and Q&A sessions with almost all of the guests in attendance.

The vendor floor was riddled with any and all manner of horror merchandise. Toys, shirts, original movie posters, prop replicas, artwork, and more all at your fingertips (for a fee of course).
Once the vendor area would close for the night, the real fun would begin. Saturday night was the costume contest, complete with cash prize, followed immediately by the second annual Miss ScArizona Pageant. Once Miss ScArizona was officially crowned, there was a live performance from a band called Casket Snatch. After the band finished their set, you were more than welcome to try your own vocal styli 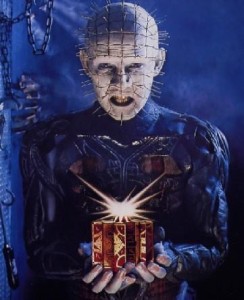 ngs out during the “Scaraoke” session.

Mad Monster Party went by very quickly, which can only mean, it was a great time. I am very happy they decided to stake a claim in Phoenix and I hope they are intent on returning for more. I can’t wait to see what they have planned for next year.
In the meantime, you can check out all of their other events around the country at www.MadMonster.com