I grew up with two older brothers, so you could say that I spent a good amount of time playing with toys that were made to target boys. One specific toy they had that I loved was their Hot Wheels. I loved playing with the different types of cars and then seeing the real things when out with my parents.

You could say that I am a bit of a movie buff, specifically horror. When I saw that there was a company called GreenLight who makes a type of Hot Wheels of iconic cars from films, called the Hollywood series, I had to check it out.

Being that I am a horror fan, I got my hands on the Friday the 13th and Gremlins vehicles. Unfortunately, the Supernatural cars were sold out, and apparently sell out fast so I did not have a chance to grab them for review. That being said, the other two cars are incredible in detail and very much worth buying. 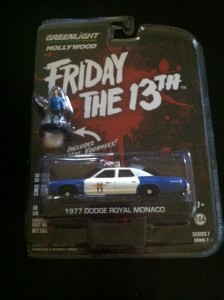 The Friday the 13t 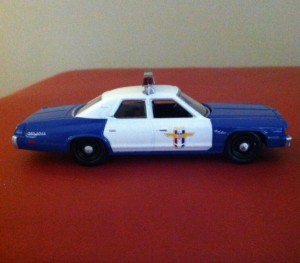 h car is the 1977 Dodge Royal Monaco, the police vehicle that picks camp owner Steve Christy (Peter Brouwer) up during the rain storm. As you can see from the pictures, Greenlight has paid attention to such detail as the decal on the front doors and the numbers on the side.

It even comes with a tiny little Mrs. Voorhees wielding the very same machete that took off her head.

The Gremlins car is the orange Volkswagen Classic Beetle that belonged to Billy Peltzer (Zach Galligan). Now, the car spent the majority of the film covered in snow so there were no distinguishable features but, if you have seen one Classic Beetle, you’ve seen them all. 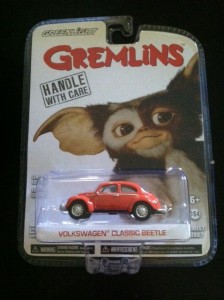 ly happy to have these two cars in my collection and can’t wait to see what other horror cars they put out. Personally, I have 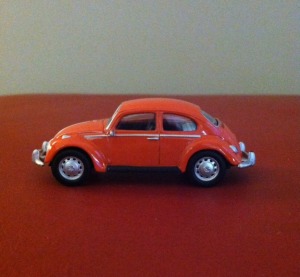 Also available from GreenLight’s Hollywood series are cars from The Blues Brothers, Gone in 60 Seconds, Old School, Anchorman, Fast Five and several more. You can check them out at greenlighttoys.com