Coming off of the amazing Horror Block month that was October, they have rolled with the momentum and provided a killer (no pun) box for November to follow.

This month’s theme was the television show Hannibal (get the killer punnow?). Though I haven’t seen the show yet, I know this box had to be a huge hit amongst its many fans. Had it been an American Horror Story or Buffy box with the same items, I’d have been jazzed.

In the box was a Hannibal t-shirt, a sheet of stickers from the show and a human heart shaped promo stress ball. I will hold off on wearing the shirt until I know if I like the show or not, but considering that I have been in search of an awesome stress ball for months, the Hannibal one couldn’t have been more welcome.

Next up, we have a film cell from A Nightmare on Elm Street. While the package it comes attached to is from the original film, I am almost positive that the cell is of Freddy playing video games, which would make it Freddy’s Dead: The Final Nightmare. Not to be a nitpicking horror geek, but it would’ve been cooler to have the package match the cell.

Then we have the Tales from the Cryptkeeper DVD with 8 episodes on it. This is easily my favorite part of the box. I have had that DVD on my Amazon Wishlist for a while so it was nice to open the box and see that in there.

Also in the box was a Godzilla scaler, which is a small Godzilla figure that hugs a cord of some sort. I plan on having him grip onto my laptop charger cord so I can make ridiculous Godzilla movie quotes every time I plug my computer in.

For the car was a “Cthulhu On Board” suction cup car window sign. While I love H.P. Lovecraft, I will never put this in my car so there are already plans for it to go to a good home.

Finally, Horror Block has stayed with Fangoria this month and sent us the Norman Reedus issue. I really hope the Fangoria theme sticks because I like it way more than the Rue Morgue magazines we were getting in the beginning.

Now for the Beast Block; this month’s was amazing! Included was a PlayStation 4 bundle with The Last of Us and The Evil Within, a Freddy vs Jason collectable with film cells, a year of PlayStation Plus membership, an extra PS4 controller and NECA 8” figures of Freddy Krueger and Jason Voorhees.  Naturally, I didn’t win it but they continue to impress.

There is still time to sign up for December’s block. Horror Block is only $30 with shipping and is worth every penny. Head over and sign up now! 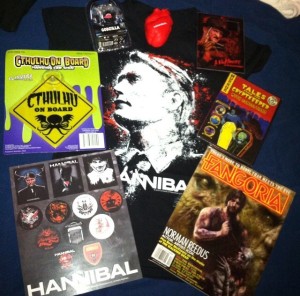