Phoenix ComiCon Does it Again!

Phoenix Comicon made a lot of promises coming into this year’s convention. They promised more cohesive lines. They promised more organization. They even promised better cell phone reception. What’s even crazier, is they made all of these promises knowing that the convention grows anywhere from 10,000-30,000 attendees a year (at least for the last 5 years). With last year’s attendance just shy of 78,000 attendees, how could you make things flow better as the convention will be approaching the 100,000 mark?

My first day there, it became very clear that not only were all of these things important to PCC, theywere the most important things. Everything was streamlined. There was no bottleneck entering the building. Registration and picking up badges moved very quickly. The official PCC merchandise was placed in the registration hall, rather than on the vendor floor, which I also thought helped expedite things further. The real test however would be once I made my way down to the newly reorganized vendor floor. After a few minutes downstairs, it was really clear that this year’s convention was not about growth, it was about the attendees. They ha 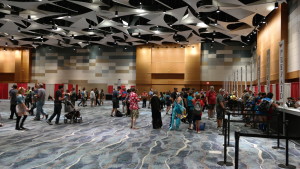 d spread out the vendor floor, moved a lot of the panels to the second floor, and moved the large displays (costuming groups, the insane lego display, the DeLorean) to the third floor along with the media guests. This freed up a ton of space and subsequently a ton of WiFi. On a side note, my phone never lost service the entire weekend. The staff this year was extremely helpful and knowledgable. I was actually even stopped once by a staff member, just for seeming confused. He wanted to make sure everything was ok and to see if I had any questions. This was truly one of the absolute best experiences I have ever had at a convention.

Every year, the convention gets a little bigger, and I am not the only one noticing. They were able to add huge guests this year like Alyson Hannigan, Jason Momoa, and Ron Perlman. While these names are not foreign to convention-goers, they do not generally attend the smaller conventions, which shows that Phoenix is becoming a force to be reckoned with. As usual, PCC spread out their guest list with a little something for everyone. Fans from everything from Firefly, Stargate, Battlestar Galactica, Walking Dead, Harry Potter, and more were far from disappointed, as major cast members from each were in attendance. For a complete guest list visit www.PhoenixComicon.com 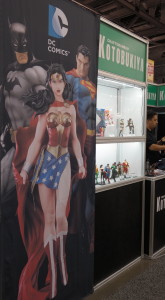 There were also more high end vendors like Kotobukiya in attendance this year, which was awesome to me, especially since I am a collector of their ArtFX lines. Dark Horse Comics and Avatar returned to Phoenix this year with amazing booths. Collectible heavyweights Fugitive Toys, Toy Anxiety, and Convention Exclusives were all in attendance for those hard to find Funko Pops. Even Build-A-Bear got in on the action this year with a display with special deals on their geekier lines (Star Wars, Avengers, Batman, etc). 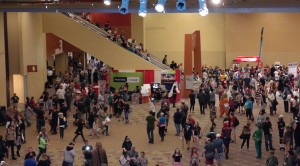 Comicon impresses me more and more. There is always something new. Truth be told, you could probably have an amazing time without even entering the Convention Center. There are just as many things going on outside as there are inside. Car shows, live bands, Larping, Roller Derby, and so much more. Let’s not forget about the food trucks also. PCC even makes sure to give us a ton of options when it comes time to eat.

Everything was laid out great, but this is no longer a convention that you can squeeze into a one day pass. I suppose that’s why, for the first time ever, weekend passes were sold out before the convention even started. If this is what we can continue to expect from Phoenix Comicon, then I am even more excited to see what the FanFest brings us in December.