Ron Marz and the Emerald Twilight 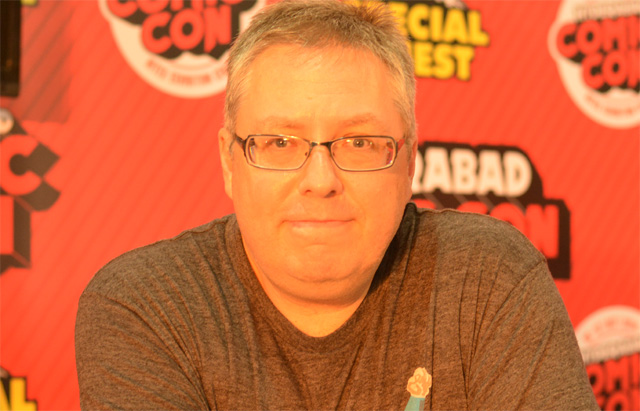 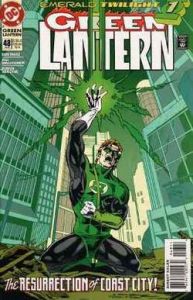 What do you do when an evil Cyborg Superman and a super-villain named Mongul destroy your hometown? Well, if you are Hal Jordan, Green Lantern of sector 2814, you lose your mind and destroy everything that’s in your path, and I mean everything.

Hal returns to Coast City and while standing in the charred remains of the once great city, he attempts to recreate it using his power ring. However, the reconstruction proves to be temporary, as it drains his ring completely. The Guardians of the Universe intervene to inform him that he has violated the rules of the Green Lantern Corps by using his ring for personal gain.

This infuriates Jordan who then sets off to Oa with the intent of absorbing the power of the Central Battery to permanently recreate Coast City. The Guardians decide to try and head him off at the pass by sending the Green Lantern Corps to stop him.

Tomar-Tu is the first to cross paths with Jordan and he meets his end accordingly. Jordan takes his power ring and gets stronger with the addition of the second ring. One by one the Lanterns fell at the hands of their one time mentor and friend. Even Jack T Chance, one of the most feared and ruthless of the Corps was no match for Jordan, as he was beaten mercilessly. Boodikka, another fierce warrior, stated that her ring was as much a part of her as her hand. Jordan proceeded to take both from her. Lantern after Lantern falls victim to Jordan’s rage. The Guardians even enlist the help of Sinestro, releasing him from his prison in the Central Battery to do battle with Jordan. By this time, Jordan has fists full of power rings. He takes them off to show Sinestro that he can defeat him without any “crutches”, and the epic battle begins. These two beat the hell out of each other for pages and pages. Power rings, fists, no holds barred. Inevitably Sinestro falls at the hands of Jordan as Jordan snaps his neck with his bare hands. Jordan begins his journey into the battery, only to be stopped by his mentor and friend, Kilowog. Kilowog tries to reason with Hal, to no avail. He attempts to physically stop him, only for Jordan to incinerate him. (One of the best scenes in the book). Jordan proceeds into the battery and absorbs all of the energy contained within. Upon exiting the battery, he is in a new and entirely badass costume and now goes by the name Parallax. He destroys all of the Guardians except one, Ganthet. Ganthet is charged with the task of finding a new Green Lantern. He is able to deliver the ring to Kyle Rayner, who will assume the helm of Green Lantern (at least for now).

Green Lantern is my favorite comic of all time, and this is my favorite story arc. I know it may seem a little strange that my favorite story is the one where my hero becomes a villain, but to me it was more about the story. Ron Marz was tasked with turning a beloved member of the Justice League into one of the most ruthless villains ever.

I had the privilege to get to interview Ron Marz about Emerald Twilight and more:

John Lawrence:  Was the Emerald Twilight story arc, already conceived prior to your taking over the helm of Green Lantern, or was it strictly your story to tell?

Ron Marz: The broad strokes of the story were in place already. DC editorial knew what they wanted to happen to Hal, and they knew they wanted a new Green Lantern to be introduced. When I was offered the gig, it was with the Emerald Twilight storyline in place, and my job was to execute it and then create a new GL.

JL:  If the story was already conceived, what parts did you add/remove, etc.?

asics were in place. They gave me a two-page outline of what was to happen in the three issues of Emerald Twilight. I honestly probably still have that filed away somewhere. The outline indicated the story beats, the details were up to me. I think the biggest aspect I brought to it was probably the on-panel death of Kilowog. I felt like the audience needed to witness a familiar and even beloved character being sacrificed. If you’re just getting rid of Green Lantern Corps members nobody knew or cared about, it really has no emotional impact. And then, obviously, it was left to me and Darryl Banks to create a new Green Lantern.

JL:  Superman was dead, and Batman’s back was broken. Did you find it hard, at the time, to turn one of the other founding members of the JLA into a villain?

RM: Well, I knew it was going to be a big-deal storyline, and that it would get a lot of attention. It don’t know that it was hard, per se, but there was certainly an emotional aspect to it. And I think that was good, because if I felt like this was a tragic story, then the audience would hopefully feel that way too.

JL:  Was there any backlash from fans?

RM: Of course. I think the story is fairly infamous for the reaction it provoked. We got letters demanding I be fired, demanding the editor be fired, calls for boycotts, a letter from a retailer saying he was telling his customers not to buy the book (which I thought was about the dumbest thing I’d ever heard). We also got a few death threats. I’m not sure anyone took them very seriously, but I believe DC turned them over to the police anyway. You have to remember, the people who are upset always make the most noise.

JL:  Who came up with the name Parallax? And how?

RM: Darryl Banks was the one who suggested the name. We were batting prospective names back and forth as Darryl was designing Hal’s new costume. We went through a lot of names before he suggested Parallax, but when he suggested it, I knew that was it, that was exactly the right name.

JL:  Did you have input on the look of Parallax or Kyle’s GL suit or did the artists get to run with it? 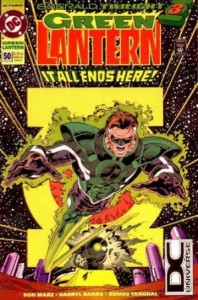 ut on both. Darryl came up with a lot of designs for both, and between Darryl, myself, and editor Kevin Dooley, we honed the look for both. Though obviously it all began with Darryl. He’s a terrific designer, and it shows in both Kyle’s original costume and the Parallax design. Honestly, one of the biggest thrills for me was to see Gil Kane draw Darryl’s designs. I think Gil is the best designer of superhero costumes the industry has ever had. So to see him interpret Darryl’s designs was a treat.

JL:  Did you continue to follow the stories that Emerald Twilight directly spawned (Final Night, Zero Hour, Day of Judgment, etc.) and do you have a favorite?

RM: Since I had to interact with all those storylines in some way, yes, I was paying attention to them. Honestly, I didn’t know until late in the game that Hal was going to be the villain in Zero Hour. The editor thought he’d mentioned it to me, but he’d actually forgotten to say anything. So it was a surprise when I found out, and kind of flattering. I don’t know that I have a favorite among those three, I like all of them. Final Night gave me an opportunity to write the Parallax one-shot that Mike McKone drew, and I really liked how that turned out.

JL:  Were you a fan of GL before you took it over?

RM: I was truthfully more a fan of the concept than any particular run on the book. I always like it when Hal showed up on “Superfriends,” and I still think his costume is one of the best ever. So I appreciated the characters and the concept, and certain storylines, but it wasn’t a book that I read regularly as a kid.

JL:  Hal Jordan killed a lot of characters during Emerald Twilight. Were some harder for you to kill off than others?

RM: Certainly Kilowog was the hardest because he had the most personality. He felt more “real” than a lot of the other Corps members. But as I said, that was the whole point of killing him off.

JL:  Have you seen the Green Lantern movie and what did you think?

RM: You know I’ve never actually watched it all the way through in one sitting. I think I’ve seen it all, catching bits and pieces on HBO, but I didn’t get out to see it in the theater. I thought it was ultimately a mixed bag. Some parts worked really well, others didn’t. I still think it’s a terrific cinematic concept, and I hope it’s resurrected at some point. There really isn’t another superhero franchise that can give you space opera quite as well.

JL:  What projects are you currently involved with and can you give us a description?

RM: I’m writing “Artifacts” monthly, along with a few other projects, for Top Cow. I’m doing a creator-owned original graphic novel called “Ravine” with Stjepan Sejic, which is also being published by Top Cow/Image. That’s due out on Feb. 20.

My creator-owned book with Lee Moder, “Shinku,” is still coming out from Image. I’m also writing “The Protectors” for Athleta Comics, which is the publishing company founded by Israel Idonije of the Chicago Bears. We lured Bart Sears back to comics to draw that. There are other odds and ends along the way, including some video game work, and I’d like to get back to writing some prose this year.

Madison : If you could have created any superhero who would it be?

RM: I have to go with the obvious answers, Superman or Batman. They’re still the best, and most everything else comes from them.

Madison: If you could have any superpower, what would it be?

RM: I’d like to have the ability to teleport. You waste too much time getting from one place to another. I’d like to be able to snap my fingers and just be where I need to be.

Stay up to date with all of Ron’s appearances and newest comics at ronmarz.com