It was Friday May 1 when I landed in Dallas at DFW airport in anticipation of Texas Frightmare Weekend. The convention hotel was conveniently located next to the airport, just a skywalk away from the parking deck. The Hyatt hotel, where the convention was taking place, validated parking in the lot, saving guests a good $50 or more on parking; more money to spend on autographs.

I arrived just in time for the convention to start. Thankfully, Fridays are one of the slower days due to it being a work day, so the lines were much shorter than Saturday was sure to be. I immediately got into the twisting line for Neve Campbell, who was located in the very back of the convention room in her own private room. I waited for 45 minutes before being allowed to enter. 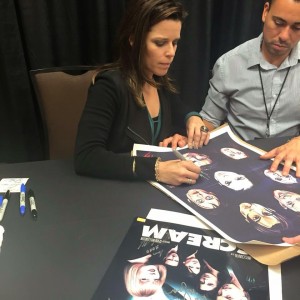 Once inside her room, I walked up to the first table where a woman asked if you were having Neve sign your own item or buying one of theirs. I had brought two of my own so I moved on to the next table where a man collected the money and handed me a sticky note with a 2 on it, representing the number of items I had. I then moved to table number three where a woman wrote down my name and asked what I wanted Neve to write on my items. I started to think of all of the great Sydney Prescott quotes from Scream but made the mistake of looking over at Neve, who gave me her huge Neve Campbell smile and my mind went completely blank. If you were fortunate enough to experience this smile first hand, you now understand the mind erasing capabilities it possesses.  I ended up just getting her signature on both items, personalized to me. It was the fastest $150 I have ever spent, and well worth every cent.

Next up was Skeet 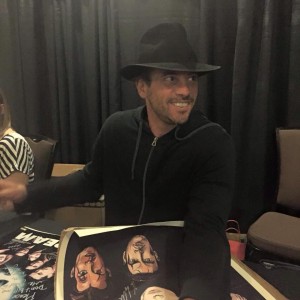 Ulrich. His table was located in a strangely dark corner near a hallway long enough to hold the long line he was sure to have. We stood in his line for about 30 minutes before we were told he needed to leave for his photo ops. Being about fifth from the front, my friend Krystal and I decided to sit and wait for him to return. It only took about 30 minutes for him to return back to his table, where he seemed genuinely excited to meet each and every person that took the time to come see him. I dropped another $100 on his autograph on two items which, once again, was worth every cent.

Next I hit the Mondo booth to grab a couple of their limited releases of the Phantasm soundtrack on vinyl. I got one of each of their white marble and black and red swirl vinyl, costing me close to $60. If you have ever tried to buy a limited release item from Mondo off of their site, you know how difficult it is to get something as they sell out incredibly fast. By picking these up at the con, I saved myself the time of watching Twitter for the sale announcement, the stress of trying to check out faster than everyone else and the money for shipping. Plus, the guy working the booth was incredibly nice and helpful.

I soon realized there was an entire room filled with guests across the hall that I hadn’t even noticed, so I wandered over to see who was there. I needed to get Tara Reid for a friend but she wasn’t at her table. The man at her table said she would be back in 10 minutes as she was on break, so we wandered around the room to see who was there. Brad Dourif’s line was out the door and Kim Coates was just as busy. Angus Scrimm, who is looking depressingly old, had a smile on his face while he signed various Phantasm items for his fans.

When we returned to Tara Reid’s table about 15 minutes later, she still wasn’t back, so we hung around for a bit. The convention was starting to close down and she never returned, so we decided to call it a night.

Saturday morning, we arrived bright and early. My friend Kenny’s flight had landed too late to get to Neve and Skeet on Friday so, by getting there early on Sat, we hoped to get a good spot in Neve’s line. As soon as we were allowed in, we made a b-line for the back of the room and ended up just a few spaces from the front of the line. I went in with my friend to take pictures for him and realized that Neve’s smile could cause brain damage two days in a row.

Next up was Skeet one more time. Once again, we got to the front and they announced he needed to leave for his photo-op in 30 minutes. Luckily, we were a few of the last people to make it through before his line was stopped.

With our Scream priorities out of the way, we went looking for AJ Bowen, who was at the Fangoria table signing for free. If you didn’t have your own item for him to sign, he had free Hatchet 2 and House of the Devil one sheets to sign for you. I got one of each signed for friends of mine and had purchased a You’re Next 11×17 for him to sign for myself since I somehow managed to forget my poster at home. AJ was so funny and friendly, making him one of my favorite guests of the weekend.

Tara Reid was close by so I was able to get her autograph on a Sharknado poster for my friend. She was frighteningly skinny but very kind. She laughed when I plopped that Sharknado poster in front of her. She had apparently signed quite a few of those that weekend.

With so many bulky items in hand, we made a quick trip to the car since our photo op with Neve a 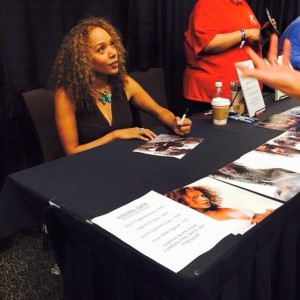 nd Skeet was coming up soon and we didn’t want to lug all of our stuff into the op room.

After a quick lunch of disgusting, but strangely satisfying, hotdogs and nachos, my friends and I headed back into the celeb room to grab a few more quick autographs. First up was Sherilynn Fenn from Twin Peaks. Although significantly older than her Twin Peaks days, Fenn was still astonishingly beautiful and her kindness did nothing but accentuate that fact. She took a picture with everyone who bought an autograph and seemed very happy to do so.

Rachel True of The Craft was next. Once again, she was someone who was absolutely gorgeous and friendly to her fans. She talked to us for quite a while before signing a picture from The Craft and taking a picture with Kenny.

Now it was time for the photo-op with Neve and Skeet. We were led into a room and snaked around into multiple lines where we sat for about 30 minutes before being moved across the room into another line. An obnoxious and unfriendly woman with a microphone talked to us like we were stupid children, unable to follow directions, despite everyone’s ability to do so. She was easily the worst part of the entire weekend. I soon forgot about her awful attitude once the line moved far up enough for us to be in the same room as Neve and Skeet. Krystal, knowing of my Neve crush since childhood, talked to Neve and told her that the picture was my birthday present and asked if she would kiss me for my picture. Without hesitation, Neve said “Of course!” and planted a good 30 second long kiss on my cheek while the photographer set the picture up perfectly. Now, if you thought her smile held powers, imagine what the kiss did. I’m pretty sure my face was red for the rest of the night and I still cannot figure out how my legs worked after that.

The man outside the photo-op room told us that we were really lucky. Apparently, Neve was ambushed by press when she got off of her plane and was really freaked out by it. Being that this was her first convention, she didn’t know what to expect from her fans after the press incident. The guy said she was very reserved and had only kissed a few fans in their pictures. Needless to say, that photo is something that will mean a lot to me for years to come and Krystal is easily my hero.

I needed to get Brad Dourif but his line was out the door and down the hallway for most of the weekend. With the photo ops happening back to back, his line was finally short so I hopped in. I spent only about twenty minutes in line before getting to meet him. He was very kind but very quiet, not at all what I expected him to be. I suppose I thought he would be arrogant and maybe a bit rude but he wasn’t, which as a fan, was a great relief.

Once through Brad’s line, I made a pit stop at artist Nathan Thomas Milliner’s table to grab one of his Scream prints and was lucky enough to get one of two left. 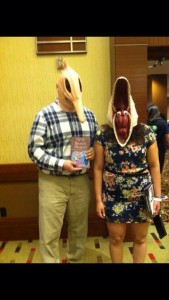 om standing in lines all day, we made one last run through the guest room to make sure we didn’t miss anyone. Sure enough, we had missed the Burns twins from The Shining. They loved hearing that we were staying in room 237 and told us to tweet them a picture of the room sign.

Our last stop was Quinn Lord, who played Sam in Trick r Treat. He is sixteen now but still looks like a boy. He has a bit of arrogance to him but what teenage boy doesn’t? He was friendly enough and took pictures with us, even took the time to talk to us about Trick r Treat 2. Since Sam is one of my all-time favorite horror characters, it was nice to get to meet him.

After one last stop at the Nice Price Books booth to grab a few items, we called it a night. My flight 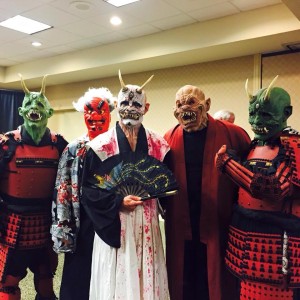 left early Sunday morning, so I did not get the chance to come back for the last day but I was told it was slow enough to get through all of the guests lines rather quickly. I wish I had been able to stay for one last day.

Between the amazing guests, the organization of the convention itself and the company of great friends, Texas Frightmare was the best convention I have ever been to. I hope that I have the opportunity to go again in the future and that they continue to deliver the quality of convention they gave us this year.

To keep up on any news from Texas Frightmare, you can check out their website www.texasfrightmareweekend.com 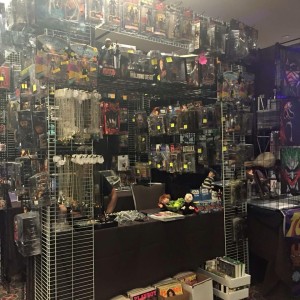 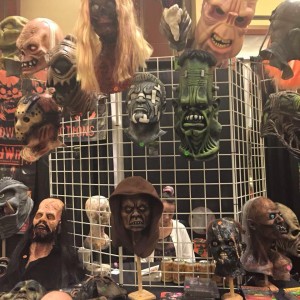