What’s in store for Phoenix Comicon 2015 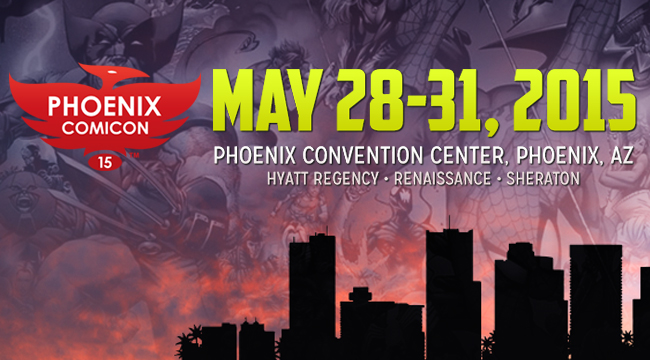 Ladies and gentleman, it’s almost time for the moment all of you Arizona geeks have been waiting for. That’s right, Phoenix Comicon is almost upon us, and this year looks to be bigger and better than ever. For starters, this year, PCC will be taking over the third floor of the convention hall. The third floor is where all of the film/media guest’s tables will be set up, along with the photo-op area. The third floor will also be the new home for Cactus Brick, the Star Wars neighborhood, and most of the Arizona cosplay groups (Justice League Arizona, Arizona Avengers, AZ Tardis, etc.). So don’t fret when you walk in the convention hall, and can’t find all of the PCC staples that you have come to love. They are still there. They have just moved on to a better place. The good news is: This will free up the main convention floor for more vendors to fulfill your every geek wish.

Now that you’ve got the lay of the land, let’s talk about the monster guest list that

the wonderful folks at Phoenix Comicon will be supplying us with this year. In the film/media category, they immediately sprung the big guns on us this year, with Alyson Hannigan and her husband Alexis Denisof (bot

h from Buffy the Vampire Slayer, and from How I Met Your Mother). The two rarely do conventions and there will most definitely be a mob at their tables. From there, in true PCC form, they have made sure to cover all bases. If you are looking for more Buffy, Charisma Carpenter will also be in attendance. For Supernatural fans, Bobby Singer himself, Jim Beaver will be there. Battlestar Galactica fans have hit the trifecta with Edward James Olmos, Mary McDonnell, and Katee Sackhoff. Maybe you consider yourself mor

e of a Browncoat, and would like a photo-op with Summer Glau. Whether you are a fan of Hellboy, Pacific Rim, or Sons of Anarchy, I’m sure you know who Ron Perlman is. For all you Trekkies, Karl Urban will be taking time off from being Chief Medical Officer to hang out with you for the wee

kend. In addition to all of these, you will find cast members of Arrow/Flash, Back to the Future, Harry Potter, Walking Dead, the Rocky Horror Picture Show,and much, much more. Check out the full guest list at www.phoenixcomicon.com/guests

If all of this wasn’t enough, they have also assembled an amazing list of comic book creators since, after all, this is a comic convention. Just some of the creators in attendance will be Norm Rapmund, Todd Nauck, Brett Booth, Jae Lee, Rafael Albuquerque, and comic legend, Jim Steranko. This list is, by far, way too long and I recommend you use the aforementioned “guests” link.

Year after year, the crew at Phoenix Comicon, take every measure to make sure that the current year is bigger and better than the prior year. They could have easily toned it down a little this year, with the addition of the Phoenix Comicon Fanfest in December, but instead it looks like they are going full steam ahead to make sure that we have the best con possible. For me, May 28th cannot get here fast enough.

Phoenix Comicon will be held in the North and West buildings of the Phoenix Convention Center is downtown Phoenix from May 28th through May 31st. For tickets and more information, please visit them at Phoenix Comicon