What’s in the Box??? A Horror Block Review 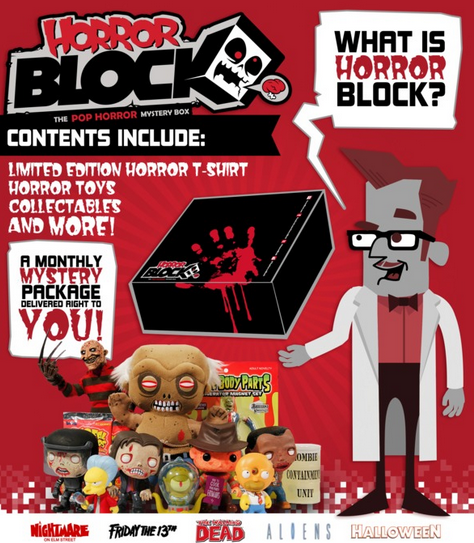 Back when Box of Dread made its debut, I paid the $20 to have them mail me a box of horror goodies. When it finally came, I was disappointed to find that my money had been wasted.

Inside was a Funko Horror Mystery mini, which was the best part of the box, an HP Lovecraft mouse pad, a small The Walking Dead fish tank heads poster, five of the same exact Childs Play Good Guys battery stickers, a business card and a pen with no cover. Needless to say, I cancelled my monthly subscription. 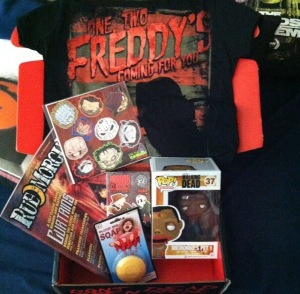 Several months later, Nerd Block announced the availability of their new Horror Block, which costs about $30 a month. Thinking it had to be better than the Box of Dread had consistently been, I hopped on it.

The boxes ship from Canada, so it takes a while for them to arrive. The first one came in July, said to be guaranteed at my house by July 3 but didn’t show until nearly the 8th. This was excused, however, when I opened the box.

Inside was, again, a Funko Horror Mystery mini, a Freddy Krueger t-shirt, a The Walking Dead Funko Pop figure, a Rue Morgue magazine, soap that turns blood red when you wash and a package of horror icon stickers. Worth every penny.

The second box was said to arrive on July 31, which once again arrived around the 4th, included a The Lost Boys Frog Brothers t-shirt, a Sharknado Funko Pop, a Rue Morgue magazine, a zombie keychain, Alien movie pins and a The Nightmare Before Christmas figure. 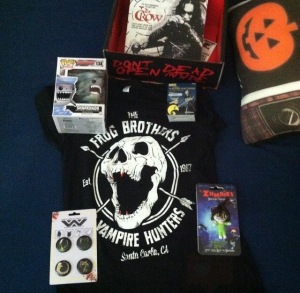 hs in a row they have exceeded my expectations and the value of the box for the price. It has been well worth the few extra days
wait for the packages to arrive.

When you subscribe, you have the chance to win a Beast Block which includes a new gaming system along with plenty of other valuable horror goodies.

If you’re planning to subscribe to something, pay for the Horror Block, available at https://nerdblock.com/horror. You won’t be disappointed.