In an industry as vast as the comic books, it’s often hard to make your vision stand out from the rest of the pack. A lot of great stories, artists, writers, and characters seem to get lost in the shuffle. For Mike Allred, this has never seemed to be a problem at all. 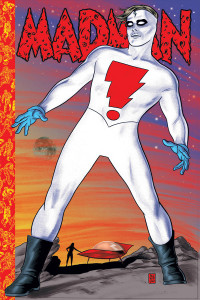 In the early nineties, Allred took the comic world by storm with his creator owned title Madman, a character like none we had ever seen, complete with his own array of unique powers, and often an inability to completely control them. For me, it was the art that attracted me to the book at first. In an era where everyone’s art was becoming sleeker, tougher, and grittier, Allred took a much simpler approach to his characters. Apparently the industry took notice, as it garnered Madman the Harvey award for Best New Series.

Allred has tackled virtually every character in the comic universe, and created a slew of his own along the way. The one certainty in every comic he takes on is that we are going to see great art, and usually a different take on the characters we love. Whether it’s Batman, Spider-man, his great runs on X-Force or FF (Fantastic Four), or his current run on the Silver Surfer, Mike Allred always brings something new and exciting to a franchise.

In between his hectic schedule of writing, drawing, and conventions, Mike Allred agreed to take some time for an interview with Geek and Stuff.

MA: Yup. I was an art major in college, since that seemed to be my fit. I’d been an artist my entire life. But then I began to panic about making a career as an artist. My childhood friend’s dad owned a radio station and I had worked there some in the summer. So I switched my major to broadcasting and became a DJ.

A recruiter from the Air Force would drop off radio spots at the station and told me I could be a broadcaster for the Air Force and see the world. Also Laura was pregnant with our first kid and so the medical plan looked attractive too.

Because of my experience I got on the faculty at the Air Force academy where I taught Television production to the Cadets at the TV station. From there I went to Europe as a TV reporter. The last story I did was interviewing East German refugees leading up to the Berlin Wall coming down.

G&S: Were comic books something you were always interested in, or did art come first and segue into the comic book world?

MA: They came hand in hand. Because of my older brother, comics were always around from my earliest memories. And Dad and Mom kept us knee-deep in art supplies.

G&S: I’m sure you hear all of the comparisons to your art and the pop art of the 50’s and 60’s. I’ve always wondered if this was an intentional direction you took to separate your art from the rest of the pack.

MA: I honestly don’t quite understand how that happened. Maybe because I have so much affection for classic comics and the language they established in the art form. I prefer to think of it as “timeless” or “classic”. I’m always making an effort to progress and be more “fashion forward”, but it is what it is.

G&S: Your current run on the Silver Surfer is nothing short of incredible. I have always been a huge fan of your art and of the Silver Surfer, but I was not sure how well they would play off of each other. The Surfer has always been drawn as this ultra sleek, stoic character, but you and Dan have breathed a new life into him, making his world a lot more fun. Was this the intention at the start?

MA:“Fun” was definitely the first word we both used to describe what we wanted to do with the book. Beyond that, personally, I’m running off pure instinct and affection for the character. Dan and I both share an intense enthusiasm for the character and I guess that energy is on the page. 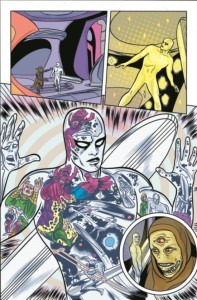 did being the artist on Silver Surfer come about, and what attracted you to the project?

MA: Well, I was wrapping up my run on FF, and Tom Brevoort, my editor on FF told me that he’d been talking to Dan Slott about a Surfer series and my name came up. He asked if I’d be interested, and after I stopped bouncing off the walls, I told him, YEAH BABY!”

G&S: Can you give us any hints as to what may lie ahead for the Surfer?

MA: I can tell you we’re about halfway through our upcoming Galactus epic since some of those images have been seen. But we’re encouraged to be secretive about any other future plans so the surprises are protected.

G&S: Is there a character that you have not worked on, that you would love to get your hands on?

MA: ALL OF THEM! Off the top of my head, I’ve always loved The Vision, Black Panther, Captain Marvel, and Warlock…

G&S: As a fan of Madman, I would be remiss, if I didn’t ask. Is there a chance that we will get to see him again?

MA: I’m trying to get a special out every year. Just released a big 3D special I’m crazy proud of.

G&S: What projects do you have coming up for us to keep an eye out for?

MA: I have a new project I’m slowly developing with Vertigo. And a BATMAN ’66 story I’m doing with my big brother, Lee. Other than that it’s all about SILVER SURFER and the Madman stuff.

G&S: On a personal note (and you can feel free to not answer this if you want), I had the chance to meet you and Laura at Phoenix Comicon 2013 and you guys seemed to be having a blast. You work together so much and travel to tons of conventions together. Plenty of couples would have killed each other already. What’s your secret?

MA: LOVE! When she started working with me full-time we were a bit concerned we’d get sick of each other. But when I was sent all over Europe as a TV reporter, and then early in my comics career, I always hated not sharing those experiences with Laura. Now we share most of our experiences and we’re all the closer for it. We just love being together as much as possible.

You can keep up with all things Mike Allred at www.AAAPop.com, and make sure to check out his fantastic run on Silver Surfer currently available at a comic shop near you. Don’t forget to take a look at our review of the new Silver Surfer.